Full Frontal) is the second (and by far more amusing) post on the inherent racism of square dancing I’ve seen recently. However, neither Ms. Bee nor the earlier article dug into the roots of the dance itself. Henry Ford and white school districts were undoubtedly a bunch of racist asses, but they were also unwittingly and quite ironically, perpetuating a dance that enslaved Africans had created, mocking the formal (in lines, box step, very “square”) dances that white people did. (And remember, Call and Response is our thing, according to your own experts, white people, lol; you can’t have it all ways, all the time!)

I suspect that the late, great George Michael may have exhibited a deep philosophical insight and explained the stiff, mono-rhythmic dancing found in many white enclaves when he sang, “Guilty feet have got no rhythm.” (Ahem…

Anyhow, the stolen and enslaved Africans quickly became adept with European musical instruments and boom- we were on the scene! (And probably having a few laughs back in the Quarters, at the white folks’ expense.) 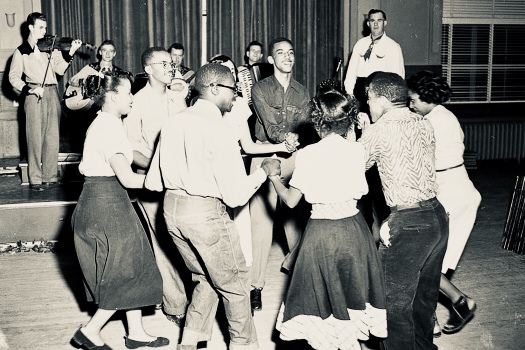 And btw: the squarest Hall of American Whiteness– The Grand Old Opry- owed its early success to the popularity of one of its founding members, DeFord Bailey, grandson of enslaved Africans😉But don’t take my word for it! (thanks, Levar) Start with the short article below, then go deeper, if you’re so inclined. James Weldon Johnson has a notation on square dancing’s creation in his famous Autobiography of an Ex-Colored Man (1912), and there’s James Alan McPherson’s short story, Why I Like Country Music, a sweetly romantic, yet insightful piece in terms of cultural identities. (In Elbow Room, 1986)

To be rather essentialist about it, in American culture, pretty much anything that’s fun, interesting, tastes good, or is cool (including the concept of “cool”itself, derived from the Yoruba yin-yang in the concepts of Ashe & Itutu) is probably based on or stolen directly from pan-Africans or Native Americans.

Ok, everyday of my life, I wake up with a song/music playing in my head. It can be anything, but whatever it is, it tends to stick until I sing it, or play it, or override it with another tune. They sometimes keep coming back into my thoughts, persisting until I stop and listen or drive my husband crazy, as he’s forced to listen to my speculations over the possible meaning or (maybe worse for him) my singing the same tune multiple times.
Sometimes it’s about the lyrics, and sometimes the tune is appropriate to my dreams or agenda, or related to whatever we watched on tv that night.  They’re often silly: occasionally jingles from childhood tv ads or tv theme songs. More often than not I’m amused by these mental musings. I don’t know if this is an experience common to many, but it’s the way of my little world.

The songs from my teens bring back the dances of that time and more than once I’ve had to stop what I was doing for a minute and take those rhythmic steps back in time, bringing laughter to my family and reclaiming a tiny bit of a girl that once was.

Today’s song is unrelated to anything current in my personal life, a blast from a favorite 1974 BBC miniseries. Now it may be stuck in your heads, too (sharing is caring)